History of the buildings 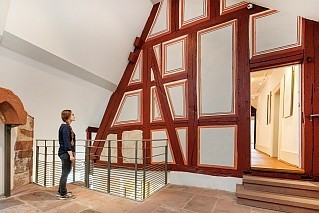 The half-timbered houses of the museum, laboriously restored, not only house the exhibition but are themselves important historic buildings. Inside the houses, details of the respective stages of construction over the centuries are visible. The main building, dated 1541, was erected by the bailiff of the archbishop of Mainz, Bernhard von Hardheim, and afterwards served various functions. In 1625 the building was taken over by the archbishopric as the seat of the local administration, the so-called Amtskellerei. In the 19th century it was used as a vicarage and wine store. In 1996, the newly designed permanent exhibtion opened its doors.

In 2006 two restored renaissance buildings, both built at the end of the 16th century, one of them as a grammar school, were added to the museum.

The permanent exhibtion: History and everyday life in Miltenberg

The roman era in the region of Miltenberg lasted only around a hundred years. About A.D. 165 under the reign of emperor Antonius Pius the romans built the part of the Upper Germanic Limes forming an almost straight border between Lorch (near Stuttgart) which came up to the river Main in the east of Miltenberg.

During the construction of the railroad to Miltenberg in 1875 relicts of one of the two roman forts (castra), the Altstadtkastell, were found west of the town. But only in a second dig, between 1970 and 1976, more secrets of roman times were uncovered with important finds. Prominent stone monuments, like the Victory Column, votive stones and other monuments with inscriptions are besides coins, tools and ceramics exhibited in the roman department of the museum. One of the most beautiful pieces is a small bronze statuette of the head of Mars. A second fort (Miltenberg-Ost) was excavated in 1912 and 1979.

More information about the Romans in Miltenberg can be found on this website. 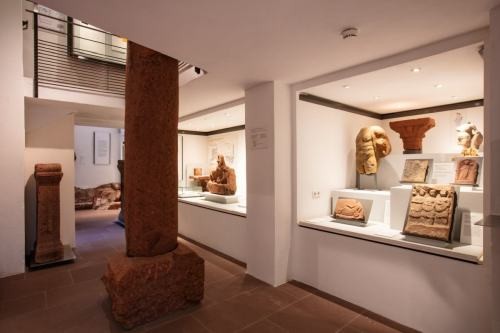 The founding of Miltenberg 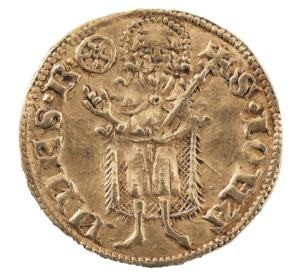 After the roman retreat to the river Rhine in the third century the Limes and its forts were abandoned. The roman forts were taken over by the local population. Traces of this repopulation in the very early Middle Ages were seen during the excavation of the roman military site. In the 12th century the Oppidum Walehusen was founded in the area of the Altstadt fort through the palatine of the Rhine.

1238/1240 the settlement was destroyed by archbishop Siegfried III. of Mainz in favour of his own foundation of Miltenberg. The continuity of the settlement from the roman period to the high middle ages is shown by the re-use of roman architectural parts. The town, situated on an important trading route from the Rhine to Nuremberg, boomed. The trade with wine and products from the sought-after Miltenberger mottled red sandstone such as building material, e.g. columns, and grindstones were most pronounced.

In the 14th and 15th century the economical and artistic upturn peaked, reflected by masterpieces of sculpting from a Miltenberg workshop, like the “Three Magi” group, the “beautiful Madonna”, the relief of a coat of arms and the coin maker. The town of Miltenberg was allowed to stamp coins, an extraordinary one was a gold coin called Miltenberger Pfennig.

(A Question of) Religion

Only a few decades after the first mentioning in documents of Miltenberg in 1237, a Jewish community was established and erected a synagogue, which belongs to one of the oldest in Europe still with its original masonry. Highlights of the exhibition of Judaica are the original Torah Ark from the medieval synagogue and a rare Omer calendar from the 19th century.

Although Miltenberg grew to be the biggest settlement at the south western Main quad, it was not an independent parish for a long period, but was part of the mother parish of the older but much smaller village of nearby Bürgstadt. The driving force behind the wish for independence was the bailiff of the archbishop of Mainz, Friedrich Weygandt. Finally, on April 29, 1522 the town was detached from the mother parish and Dr. Johannes Drach was named the first parish priest. Drach was a close friend of Martin Luther and because of his discipleship to the lutherian reforms had to leave Miltenberg after one year on order of the archbishop of Mainz, Albrecht von Brandenburg. 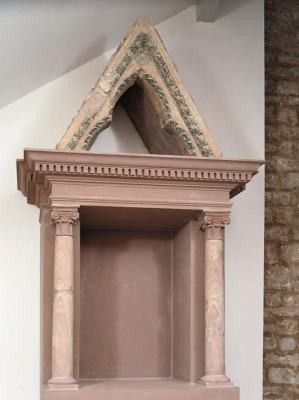 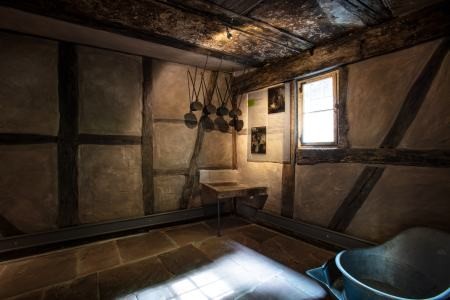 Everyday life is visualized by the vast collection of glass, stone ware and ceramics covering the time from 17th to the 20th century. These articles of daily use were mostly imported to Miltenberg from specialized locations in the vicinity, glass from the Spessart, stone ware from the Odenwald.

Some rooms in the museum give an impression as to how urban rooms were furnished in former times. A Biedermeier and a Jugendstil (Art nouveau) room are only two examples. A so called “black kitchen” shows the sparseness of the working place of the housewife and the servants until the end of the 19th century, while a kitchen from the beginning of the 20th century shows the improvements with cooker, cooling box and several kitchen tools.

Another aspect of everyday life is children’s games. The toy collection, a donation of Roland Schildhauer, is one of the most beautiful and important special collections of the museum. The collection comprises brick building and mechanical sets, steam engines and railed vehicles and accessories which give an overview of the development of toys from the beginnings of the early 19th century until now.

Fishery and waterway transportation were important lines of business for the inhabitants of Miltenberg until the 20th century. The fishery section of the museum presents tools of the fishermen, like casting nets, gillnets, which were allowed and also fishing tools which were illegal. The last wooden cockle boat and a dug-out canoe from the 14th century dominate the setting. 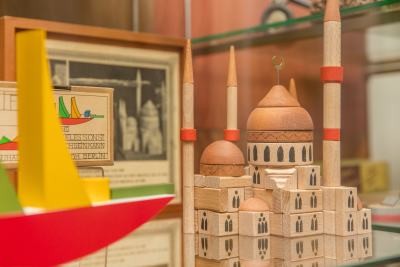 An impression of the toy collection exhibited in the Museum Stadt Miltenberg (Photo: Felix Löchner)

1816 marked a serious break in the history of Miltenberg. For about 600 years Miltenberg belonged to the archbishopric of Mainz, which was suspended during the Napoleonic wars in 1803. Miltenberg was situated on the borders of several newly established states and so the town came under the rule of different sovereigns within only a short period of time. At first it was on the northern edge of the principality of Leiningen. After the mediatisation in 1806, Miltenberg was situated at the northern border of the grand duchy of Baden, from 1810 to 1816 it was part of the grand duchy Hessen-Darmstadt which was followed by the kingdom of Bavaria. Through this marginality Miltenberg lost its commercial continuity in the 19th century. In the exhibition, the very personal implications of the political changes are exemplified by the fate of the sculptor Joseph Bonaventura Berg. 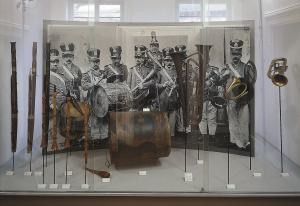 With the changeover to Bavaria in 1816 Miltenberg lost its long established historical and commercial links to the surroundings once belonging to the archbishopric of Mainz. The citizens had to get accustomed to the new Bavarian weights and measures. The abrupt change was hard for the population, so discontent among the neo-Bavarians grew. To facilitate the change, king Ludwig I. enacted not only a broad administrative reform but also the so-called “oompah edict”. In the district capitals Landwehrkapellen, military brass bands, were founded to support the growth of empathy. In the beginning of the 19th century the bands played in the instrumentation of the “turc music”. This helped the museum to acquire possession of an exceptional collection of brass and wood wind instruments.

The gallery is located on the top floor of the two renovated buildings which were added to the museum in 2006. The picturesque historic centre of Miltenberg, especially the old market place, the Schnatterloch, enjoyed great popularity in the 19th century, not only from local artists.

Beside the Miltenberg-born Philipp Wirth, a regionally well-known portraitist of the 19th century, many artists chose the romantic town as their domicile and worked here, or spent their remaining years in Miltenberg. In the gallery the works of Jakob Fischer-Rhein, who came here during the second world war, are exhibited. The museum is proud of housing some pictures of Rudolf Hirth du Frênes, a painter belonging to the circle of Wilhelm Leibl in Munich. 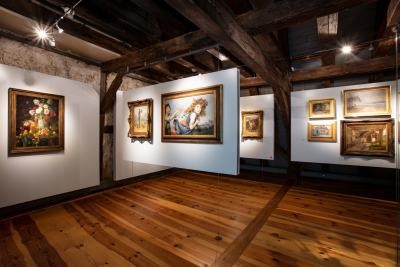